The store will not work correctly in the case when cookies are disabled.
Artikelnummer
LGPGAPG
Autor
Japan Pair Go Association 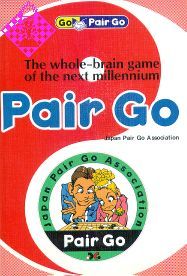 05 Chapter One: Signs of an International Boom

08 Depths inaccessible to the computer

12 The Internet is 'hand talk'

15 No longer just a hobby for middle-aged men

19 Surprised to find how interesting Pair Go is

22 The habit of reading four moves ahead (Kobayashi Satoru Gosei)

How to Make the Most of Pair Go

24 The process is much more interesting than the result

24 The pleasure is doubled, the responsibility is halved

25 The combination of a happily married couple

26 An unlimited number of ideal partners

28 Don't let your guard down: there are three opponents

30 Getting stronger before you realize it

31 Strong players get weak players to teach them

32 A relaxing way to teach Go to beginners

52 The secret of winning in Pair Go

72 Main games from the 1st round

As a mental sport that transcends race and nationality and borders, Go is widely loved by the people of the world. It is our hope that Go will be enjoyed by even more people so that the Go population of the world can expand even further.

To help further this aim, we have devised and striven to popularize the game of Pair Go as a grass-roots tool for international communication, using black and white stones as the world's common language. As a result, the circle of Pair Go fans is expanding year by year. Since the holding of the 1st International Pair Go Championship in 1989, Pair Go has spread rapidly among Go fans around the world. Nowadays, Pair Go provides a new stage for formal socialization in countries around the world.

Pair Go and the PANDA NET: these tools are designed to expand the world's Go population by linking activity in countries around the world centring on the PGPP (Pair Go Promotion Partner) in each country. The aim is to increase the current Go-playing population of the world by three to five times, that is, to one hundred million. We are doing our best to ensure the attainment of this goal by the early 21 st century.

It is our hope that this book will also play a part in attaining our goal.