The Soviet empire strikes back 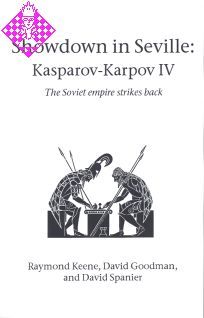 This book recounts the fourth and penultimate chapter in the half-decade long rivalry which erupted between Garry Kasparov and Anatoly Karpov. In the eyes of many this conflict symbolised the clash between the Brezhnev-inspired forces of reaction in the old USSR and the new Gorbachev/Yeltsin-driven imperatives which ultimately led to the collapse of the creaking Soviet empire. The match itself - played out in its nailbiting finish to a global TV audience of record dimensions - hung on the very final move of the very last game, as Kasparov desperately sought to cling to the title he had gained just two years beforehand. Books on the Karpov-Kasparov clashes of 1984, 1985, 1986 , and 1990 are also published by Hardinge Simpole.

David Goodman is an International Master who resides in New York. During the Karpov-Kasparov clashes David worked as a correspondent in London, Leningrad, Seville and Moscow, enjoying unrivalled access to behind-the-scenes information. He has, amongst many other publications, co-authored three books on Kasparov's matches against Karpov.

The late David Spanier was Chess Correspondent for the Daily Telegraph, Diplomatic Editor for the London Times, and author of Total Chess.