The Style of Iyama Yuta 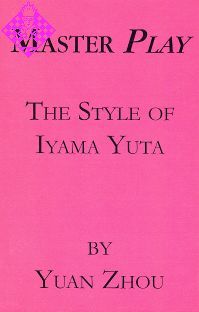 lyama Yuta 9 dan is leading a new generation in the world of Japanese professional go. Born in 1989, he was recognized as a child prodigy and became an insei when he was ten. At the age of sixteen he won the Agon Cup, becoming the youngest Japanese pro ever to win an open title and reach the rank of 7 dan. Iyama became a 9 dan when he won the Meijin title in 2009, again setting a record as the youngest to win one of the seven top Japanese titles and the youngest ever 9 dan.

simultaneously several times and at this writing holds six of them and is competing to become the challenger for the seventh. Only one player has ever held all seven titles at the same time, Cho Chikun. Also at this writing, he is winning more than 80% ofhis games, many ofwhich have been

played in title matches against the strongest Japanese pros. Tyama prefers to play territorial style although he is very flexible and is known for his thick and solid play. He typically waits for his opponent to attack and responds with excellent fighting skills. Iyama's expertize at and enthusiasm for fighting makes him somewhat unusual among Japanese pros, but he leans more toward a territorial style than is typical of pros from other countries.

Iyama is the strongest Japanese born pro to emerge in recent years and is Japan 's great hope for a resurgence of Japanese success on the international level. He won his first open international title, the Asian TV Cup, in 2013, defeating Lee Changho of Korea in the first round, Wang Xi of

Iyama's dominance among Japanese pros is weil illustrated by his success in winning the top three titles (Kisei, Meijin, and Honinbo) in recent years. The Kisei is the most prestigious title in Japan and has the largest prize for the winner ofthe title match, about $400,000 USo lyama has held this title for the last four terms, winn ing it fi rst in 2013. If he wins it again in 2017 for the fifth time in a row, he will earn the title of Honorary Kisei, which has been acquired only twice before: by Fujisawa Hideyuki (also known as Fujisawa Shuko) and Kobayashi Koichi. Iyama first won the Meijin, the second most prestigious title, with a winner's prize of about $370,000 US, in 2009. He won this title again in 2010, and since winning it again in 2013 has held it for the last three years. Only two players have won this title five times in a row: Cho Chikun and Kobayashi Koichi.

The third title among the top three is the Honinbo, for wh ich the winner's prize is about $320,000 USo lt is the oldest professional title in Japan and was originally an honorary title given to the leader ofthe Honinbo school. Starting in 1939 it became a competitive title. Winning this title five times

in a row also brings an honorific title, which has been done by Takagawa Kaku, Sakata Eio, Jshida Yoshio, and Cho Chikun. Jyama has won this title the last four years. When he won the Kisei in 2013, Jyama became the youngest player to have held all seven of the top Japanese titles at the same time, which had only been done before by Cho Chikun and Cho U. Ifhe wins the Judan in the Spring of2016, he will hold all seven in the same year. Iyama has not had a similar level of success in international matches, which is partly the result of a lack of participation in such matches because of his playing in so many Japanese title matches. Besides the Asian TV Cup and the Bosai Cup, he also won the Japan-China Agon Cup in 2015.

07 Game One, vs. Yamashita Keigo