how to tame Alekhine, Scandinavian and Pirc 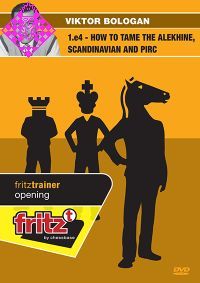 While almost everybody is spending 95% of his opening preparation time on major lines, there are some tricky players including strong GMs (I am not an exception) who prepare for their opponents some side lines, which contain many an underwater reef. I decided to collect those secondary openings in one single DVD. From now on openings such as the Pirc, the Scandinavian and the Alekhine Defences will not appear to you in your nightmares any more. The 1.e4 player should be actually thank Black for choosing these openings, since he is providing White with a better centre, a stable advantage and generally speaking pleasant play. The only thing White needs to do is to spend some time studying the lines. I will not bother you with encyclopaedic approach. There is a more practical way. Against each opening I recommend one repertoire:

Enjoy the videos and be critical please: I don’t claim to give you the ultimate truth, I just want to help you to enrich your chess vocabulary!