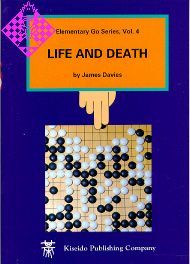 Following the general pattern of its predecessor Tesuji, this book organizes over two hundred life-and-death problems and examples into thirty-six short chapters. Noteworthy features include:

-The "status" approach, which takes the reader through the same analysis that he should perform in actual play.

-The grouping of the problems around common tesujis - throw-in, placement, etc. - and standard shapes - the one-, two, and three-space notchers on the sides, the corner L groups, etc.

-A logical, step-by-step development, which makes Life and Death first an excellent text to learn from, then an invaluable reference work to come back to.

When I started to play the game of go in the United States, books of life-and-death problems were not available, so I studied the subject on my own by attempting systematically to analyze some of the shapes that kept appearing on the board. This was a time-consuming project. In some cases it took years to reach the right answer. In a few cases, equal time was spent in reaching the wrong answer. Right or wrong, the answers went into the first edition of this book, which, by emphasizing the status of standard groups, has apparently helped many players to win games. The second edition takes the same approach as the first edition and largely contains the same material, but corrects the mistakes that have been pointed out over the years.

A number of people have contributed to this book in various ways. It is a pleasure to acknowledge the assistance of the following:

1) Stuart Dowsey, who, before he left Japan, put together a collection of life-and-death problems into which I dipped two or three times;

2) James Kerwin, who took time to read the final draft of the first edition and was responsible for a number of corrections and improvements;

3) my wife Toshiko, who cut and pasted into the manuscript all of the eight hundred twenty-two diagrams;

4) Mark Boon, Richard Hunter, Pierre Colmez, and others who pointed out various errors that remained in the first edition.