The store will not work correctly in the case when cookies are disabled.
Artikelnummer
LGBOZGGPFDP6
Autor
Nihon Ki-inRichard Bozulich 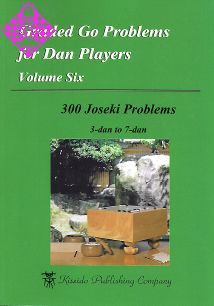 This book is a continuation of Volume Three of this series. It contains 300 joseki problems that will test and expand your understanding of josekis and your ability to deploy them effectively as part of your opening strategy. It is divided into two parts, each containing 150 problems. The first part analyzes joseki from the local perspective. In the second part, openings taken from professional games, in which the first moves of the joseki have been played, are presented. You are asked to choose the variation of the joseki that is best suited to the overall board position, so this part constitutes the study of fuseki as well as joseki.

At times the correct move is not one the standard joseki moves. It can be an innovative move that is different from what is part of the standard joseki canon. In go, such moves are referred to as kiai (fighting spirit). Consequently, this book can be used as a supplement to the various joseki dictionaries.

The key to mastering josekis is not memorization but understanding. The problems in this book focus on the key points and tesujis onvolved in josekis. The key points refer to the moves that involve tactical decisions. Should yo go for profit on the side or build thickness and central influence on the outside? These tactical decisions come up in most joseki patterns and affect your overall strategy. Working through and reviewing these problems will give your game added depth and breadth and make you a formidable dan player.