The store will not work correctly in the case when cookies are disabled.
Artikelnummer
SCOKASKI2NDE
Autor
Rustam Kasimdzhanov 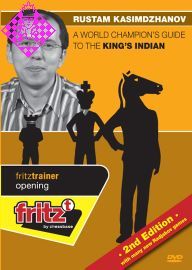 This disk is a perfect tool for players looking for a complicated battle against 1.d4. The author suggests the King's Indian Defence and shows with a number of examples how realistic Black's chances are in this opening to get a complex structure with the most serious attacking potential. Apart from theoretical information, the disk also contains structural insights and an array of ideas which will enable you to include this opening into your repertoire - immediately and with tangible success!

The extended 2nd edition is based principally on games which have been played in the last three years with, as Black, either the author himself or top King's Indian expert Teimor Radjabov. This has resulted in the creation of a work on the King's Indian which not only gives deep insights into the variations and plans but also presents the most up-to-date state of affairs in this dynamic and active opening.

Rustam Kasimdzhanov, born in 1979, the grandmaster from Uzbekistan has for many years been known as a very strong and imaginative player. However in 2004 Rustam Kasimdzhanov (pronounced "Kah-zeem-jha-nov") shocked the chess world by winning the FIDE world chess championship title, beating a string of world-class players like Ivanchuk, Grischuk, Topalov and Adams in the process. Kasimdzhanov is a very deep player, who is able to explain chess ideas in an eloquent, lucid style, with a fine touch of humour. His lessons are both entertaining and instructive - perfect for students who seek to avoid "dry" theory.