The store will not work correctly in the case when cookies are disabled.
Artikelnummer
LOKEEMCT198081
Autor
Raymond Keene 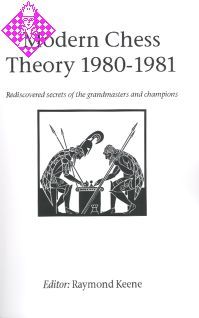 This reprint revives writings by world champions and title candidates including Dr Max Euwe, Garry Kasparov, Bent Larsen, Jan Timman and Jon Speelman.In addition there is a host of material by ingenious theoreticians, which has not only stood the test of time, but may well form a devastating arsenal of secret weapons for your own games. Modern Chess Theory magazine, under the editorship of Grandmaster Ray Keene was originally published from 1980-1982.

Raymond Keene is a British Chess Champion,and the first British Player to achieve a FIDE (World Chess Federation)Grandmaster norm.He was awarded the OBE for services to chess in 1985.He is Chess Correspondent of The Times,The Sunday Times,The Spectator,and The International Herald Tribune.He is a prolific author of chess books,several of which are classics of the genre.He has organised three World Chess Championships.