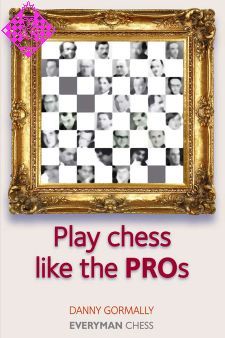 What separates the greatest chess players from mere mortals? Grandmaster Danny Gormally believes that understanding, preparation and will to win are three crucial factors. He also believes that a player's capacity to improve is limitless, and in this age of computer-assisted learning the opportunity to do so is greater than ever before. But are you prepared to really stretch yourself, to take yourself out of the comfort zone?

Play Chess Like the Pros attempts to bridge the gap between the best and the rest. Gormally studies the styles and strengths of some of today's leading Grandmasters, the characteristics which help to make them succesful, and how we can learn from them to improve our own chess. Nearly 15 years of experience as a chess professional leaves the author ideally placed to tell the stories, not just behind the moves but also the characters who play them, offering the reader an insider's candid view of professional chess in the modern age.

Danny Gormally is an experienced Grandmaster with many tournament successes. He has played for England and is a former British Rapidplay Champion.

The inspiration for this project came from a conversation I had when playing in Hastings, many moons ago. Walking down the hill back from the tournament hall with a couple of my fellow aspiring mega-talents, we were joined by a young Dutch player. I started going on about how tough it was being a chess pro, to which he abruptly interjected: "you are pretty weak for a professional aren't you?" A cheap jibe I felt. Despite having my ego completely flattened, in these days of hyper-inflated ratings, where even 2700 will struggle to get you a regular income, I have to say deep down I agreed with him, even if his throwaway comment stung quite a little.

These thoughts in turn provoked the question: just what is it that separates the very best players in the world from a struggling pro like myself? Is it just a higher level of ability, or do other factors come into play? If I could quantify the three most important factors that separate the best players from the rest, I would probably come up with the following:

I've never met a grandmaster that was easy to beat. It's easy to underestimate their competitive instincts, that desperate desire to escape the bitter stab of fail­ure. And the higher up the ladder you go, the more you perceive this. Grandmas­ters are chess street fighters. They simply refuse to lie down and die! It also comes down to inner belief: the top players in the world completely believe in the superi­ority of their thinking over that of others.

Preparation is so important in chess. A broad knowledge of both chess culture and many different openings is crucial. Quite simply the more knowledge you accrue, the better your chances will be.

It's funny, but every time I've gone up a level and taken on world-class players, it's like they are speaking a different language. They know where the pieces belong, they know which plans work in different types of positions, and seem to have a far higher level of general understanding. They also have a far greater knowledge of chess culture and history.

In this book I want to look more closely at these aspects, and others, and try to find a way to bridge the gap in understanding and knowledge that separates the very best in the world from the rest. I believe that a chess player's ability to im­prove is unlimited, and in today's high technology world, with super computers and so on, the opportunity to do so is greater than at any point in chess history.

But you really have to want to stretch yourself, to push yourself out of your comfort zone. So you can analyse five moves ahead? Why not make it 10? Calcu­late 10 moves further? Why not 15? Basically most of us are stuck in a rut. We do the same things and fail to challenge ourselves on a regular basis; the key is find­ing to what extent that is the case.

But this is more than just an attempt at a self-improvement book; I've also tried to tell the story behind the moves, to introduce the characters, and to show the reader what it's really like to be a chess player in these strange times.

098 The Gamblers and the Grinders

149 Solving Problems in the Opening