The Games of Robert J. Fischer 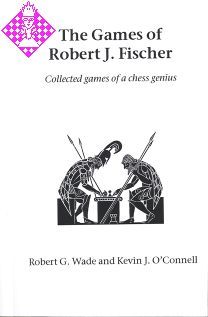 The ultimate games anthology: every game by the legendary Bobby Fischer up to and including his historic East v West victory against Boris Spassky in Reykjavik 1972. There is also a complete record of all Fischer's tournament and match performances. Many of the games are furnished with deep explanatory notes. This is a book which made publishing history!

Kevin O'Connell was a former FIDE - World Chess Federation - zone President who was an expert in rules, ratings and archives. He was instrumental in collecting all traceable games by Bobby Fischer up to his conquest of the World Title in 1972. Bob Wade, twice British champion and for decades chief junior coach of the British Chess Federation, was one of the driving forces behind the explosion of chess in England which led to three team silver medals in the chess Olympiads of 1984,1986 and 1988 and to a British player, Nigel Short, challenging for the world title in 1993. Wade won the International Master title in his own right, and would doubtless have obtained a Grandmaster title under modern title stipulations.

Robert James Fischer of the United States became, in 1971, die highest-rated player in the history of chess by overwhelming three of the world's top grandmasters. In the 1972 World Championship match at Reykjavik he defeated Boris Spassky of the Soviet Union 12 1/2 - 8 1/2. At the age of 29, Fischer is the first western champion since Dr Max Euwe in 1935-7.

This book contains all of Bobby Fischer's serious games, accessible to the editors, dating from 1955 when, as a boy of 12, Bobby's games first appeared in print. The basis of this work, the games, stems from a file, on Fischer's games, started by Kevin O'Connell when he was a schoolboy.

Twenty of Fischer's important games, mostly recent, have been fully annotated by Bob Wade. A large number of the remaining games have notes on critical variations; a lot of these notes have been digested from many sources. (Prime sources are difficult to track down and often stem from post-mortems by the actual contestants.) Diagram positions are liberally scattered throughout the text to aid readers in selecting games and browsing.

When the move record of a known game has not been available this is clearly indicated in the text (where all the events are listed, often with tournament tables), in order to encourage future research.

Included in the book are:

1 a general appreciation of Fischer's achievements by Harry Golombek;

2 a technical appreciation of Fischer's particular skill in opening play by Les Blackstock;

3 the story of Fischer's growing up in New York and how he won all eight US championships that he played in, told by Arthur Bisguier;

4 how Fischer matured as a player from his Interzonal in 1958 up to his 1972 victory over Petrosian, traced by Paul Keres;

5 the serious journalist's picture of Fischer's play in all world championship events from Portoroz 1958 by Leonard Barden;

7 jottings on Fischer at other international events by Bob Wade;

9 besides the usual opening and players indices, an index of total results against every player listed.

Fischer's games commend themselves by being the most tense, the most exciting and the hardest-fought examples of contemporary chess. This fighting spirit is strongly influencing die efforts of a new generation of players.

Part One: US Championships and North American Tournaments

043 The Making of a Legend Arthur Bisguier

321 Bobby Fischer - from the Opposite Side of the BoardPaul Keres

331 From Portoroz to PetrosianLeonard Barden