The store will not work correctly in the case when cookies are disabled.
Artikelnummer
LOWARCGTDA1D4
Autor
Chris WardJohn Emms

A Complete Guide to Defending Against 1 d4

Starting Out: Nimzo and Queen's Indian 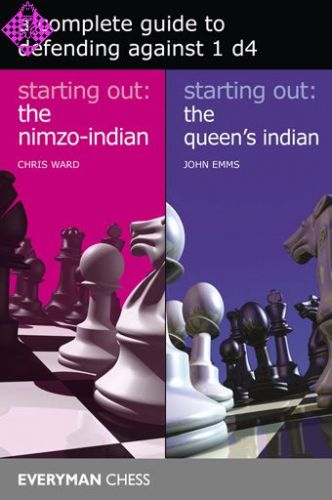 The Nimzo-Indian is one of the soundest and most popular defences against 1 d4, offering Black the chance to unbalance the game early on and play for a win without undue risk. Advocates include virtually all of the world's top players, including Garry Kasparov, Vladimir Kramnik, Vishy Anand and Anatoly Karpov. In this revolutionary book, Grandmaster Chris Ward revisits the basic principles behind the Nimzo-Indian and its many variations. Throughout this easy-to-read guide the reader is helped along by a wealth of notes, tips and warnings from the author, while key strategies, ideas and tactics for both sides are clearly illustrated. This book is ideal for the improving player.

The Queens Indian is one of Black’s most dependable and respected defences to the queen's pawn opening. It is an established favourite amongst world-class Grandmasters such as Vladimir Kramnik, Vishy Anand, Michael Adams and Judit Polgar, not to mention Anatoly Karpov, who has been a loyal Queens Indian supporter and theory developer for over three decades. Rather than classically occupying the central squares with pawns, Black adopts a hypermodern approach and endeavours to control this key area with pieces. This procedure leads to rich and varied positions that will appeal to players who like complex play. In this easy-to-read guide, Grandmaster and Queens Indian expert John Emms goes back to basics, studying the essential principles of the Queens Indian and its numerous variations. Throughout the book there are an abundance of notes, tips and warnings to guide the improving player, while key strategies, ideas and tactics for both sides are clearly illustrated.

Starting Out: The Nimzo-Indian

Starting Out: The Queen's Indian