The store will not work correctly in the case when cookies are disabled.
Artikelnummer
LXCROAYC
Autor
Colin Crouch 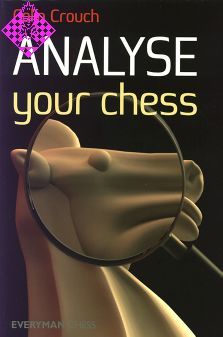 Leading chess author Colin Crouch believes that the key to sustained chess improvement lies in the critical analysis and assessment of your own games. Each and every game you play provides a significant learning opportunity, and this opportunity should never be squandered.

In this sequel to his highly acclaimed Why We Lose at Chess, Crouch examines what we should do to maximize our chess results and ratings, how to turn losses into draws, and draws into wins. Here he focuses on major issues such as improving decision making, how to plan after the opening, how to maintain objectivity, improving endgame skills, the psychological aspects of the game, and much more. Read this book, analyse your chess, and get ready to improve your results!

I knew I wanted to write this book, but I was not quite sure how I was going to handle it. I had just written How to Lose in Chess, based on serious mistakes I made while playing in 2006 and 2007. This was in part a psychological exercise. I had suffered from a stroke at the end of 2004, and I lost most of my eyesight. Many players in such a condition would want to give up the game, but my instincts were to play chess seriously, to recover my thought processes. Sometimes the blunders I made were painful. Of course, in my book I tried to make light of this, but they were painful.

A few years later, I wanted to go through my more recent games. I had ana­lysed in great depth top grandmaster games (Modern Chess Move by Move ), and wanted to see how well I could play over the board. It was soon clear that my play was not encouraging. I made far fewer outright blunders in the opening, but found I made many small technical errors, which can easily add up to several half-points lost. If chess was easy, I would have been able to iron out all these blem­ishes some twenty years ago. Unfortunately, life is not so simple.

For this book I went through fifty games from 2009 and early 2010, aiming to isolate many weaknesses in my play. I have included all my losses in that period, plus games in which I did not lose, but in which I have made identifiable mistakes. Slightly over twenty of the games are not included, either because they were sim­ple and straightforward wins, or because they ended up as steady draws. The oth­ers are of more concern, and I have annotated and analysed these games closely. I go on the basis that if I had not understood something over the board, most read­ers will have had similar difficulties.