The store will not work correctly in the case when cookies are disabled.
Artikelnummer
LOPEDC1E4A1D4
Autor
Nicolai V. PedersenPeter Lalic 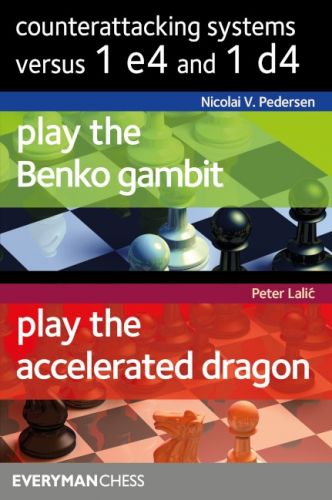 Two great books from the Everyman Chess Library, Play The Accelerated Dragon by Peter Lalic and Play the Benko Gambit by Nicolai Pedersen , brought together in one volume.

The Accelerated Dragon remains one of Black's most popular choices in the Sicilian, and the attractions are obvious. Black's opening strategy is easy to understand, and his pieces are quickly developed on active squares. Furthermore, White players hoping to attack in the same way as against the traditional Dragon will be shocked by the Accelerated Dragon's greater flexibility and possibilities for a swift counterattack.

In this book, Peter Lali\'e6 presents a repertoire for Black based on this line. He outlines a reliable system of development with the aim of choosing clear, consistent plans. Firstly, he demonstrates why the Accelerated Dragon exponent need not fear the Yugoslav Attack. Secondly, if White chooses instead the positional Maroczy Bind approach he emphasizes that positional understanding is far more important than memorization of move sequences.

The Benko Gambit is undoubtedly one of Black's most dynamic openings. In return for his pawn investment Black gains long-term pressure, which is often so powerful it continues right through into the endgame. White must decide whether to grab the pawn and try to hold on, or to choose a more aggressive approach. Either way, Black generally succeeds in his aim of unbalancing the position from a very early stage.

In this book, Nicolai V. Pedersen presents a concise and practical repertoire for Black within the Benko Gambit. Using illustrative games, he examines the critical main lines of the gambit, the tricky sidelines and also explains how to meet the various options White has of avoiding the Benko.