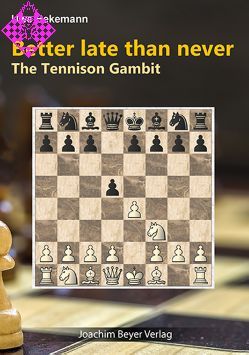 This is one of these old stories from chess history which can neither be confirmed nor ultimately refuted. According to the story, and so far there is no doubt about its authenticity, Otto Tennison was a Danish player who lived in the 19th century. He used to open all his games categorically with the strongest first move 1.e4 until one day he became so fed up with all the elaborate variations his opponents threw onto the board without even thinking that he said to himself, \u750?Enough is enough! From now on I will choose a completely different approach.“ Thus spoke Otto Tennison, and at the next opportunity when he played with the white pieces, he threw 1.Nf3 onto the board without even thinking. Alas, when his opponent answered 1...d5, he was overcome by doubts about what he had done. He sat and stared at the board as if in deep meditation, but suddenly, like struck by lightning, he took his king pawn, pushed it to e4 with great decisiveness and uttered - more to himself than to anybody else, \u750?Better late than never!“ The Tennison Gambit is one of these openings which the chess world has almost entirely neglected up to now. The initial move order 1.Nf3 d5 2.e4 (or less often 1.e4 d5 2.Nf3) leads to positions which are new territory for most players. As a surprise weapon it is the ideal approach to lure your opponent into theoretical no man\u700?s land almost from move one.

Uwe Bekemann holds the title of \u699?National Correspondence Chess Master\u700? and is the author and co-author of several opening books.